“We’re all ghosts. We all carry, inside us, people who came before us.”    ―Liam Callanan, The Cloud Atlas

Before the Pyramids and the Stonehenge, We were Here.

Malta is rich in Neolithic historical sites that display a phenomena of cultural, artistic and technological advancement from a very early period of human life.  Xagħra in Gozo is the site of the world’s oldest free-standing temples, the Ġgantija complex . This particular prehistoric site dates back to 3600 – 3200 BC, a monument that precedes even the Egyptian pyramids and Stonehenge. There was a human population present in Malta around 5000 BC. The generations evolved to engineer structures of monumental spatial dimension that are believed to be sacred spaces. The mysteries and secrets locked away here might be channeled as you stand amidst the physical remains of the lives of the ancients who were our kin.

Before wandering through the temples of Ġgantija in the town of Xagħra, you enter the newish, dark grey structure of the interpretation center. Here visual displays and a film chronicle the evolution of the discovery of the temples and the revelations that came to light over the last 300 years. Some important finds from the site, i.e., statues, jewelry, pottery and tools, are displayed. It is time well spent to get a primer and understand the history.

I was being needled by a cryptic description about the worship of over-sized female deities. Iconic statuettes of bold, large-framed humans pictured in guide books and displayed in museum gift shops were supposed to represent statues found during the archaeological excavations. But here, I couldn’t find a satisfying explanation for how the site became entangled with the myth of the robust goddesses of Malta (‘fat goddesses’ was the terminology that was used in a book I was following).   It’s been remarked that some of the figures may have actually been robust males similar in girth to sumo wrestlers. There was also a statuette showing two identical plus-sized figures of unspecified sex seated on an intricately carved seat that looked like a sofa (to me it looked like they were wearing pleated skirts). In anthropological literature, it is said that the size profile of prehistoric figurines is a good indicator of what was considered as ideal in that society. Corpulence could have signified health, prosperity, and fertility whether male or female.

In another piece I had read that the found figurines were called “il-Kbiri” in Maltese meaning “The Great Ones”. This was translated to English simply and crudely as “The Fat Ones”.  Having had many personal humorous encounters with the Google translator when translating from Polish to English, I know how easy it is to make a literal translation which does not decode the meaning of the “entire phrase” just the meaning of the “individual words”.  Often the outcome is silly.  The term, “The Great Ones” in this context could refer to the stature, i.e., gods or goddesses, or to the legendary giants who were supposed to have built the structures of Ġgantija. The massive scale of the stones and walls gave rise to legends of giants building the temples. In reality, archaeologists believe that the builders of these structures were normal-sized, exceptionally skilled, artists and craftsmen. It’s not known for sure who “The Great Ones” were but it is a compelling contemplation for wandering through the exhibits.

With no definitive satisfying explanation, I continued to entertain the possibility of an ancient mysticism based on corpulent earthy gods and goddesses fed from the products of the rich Maltese earth accompanied by the clear water from rocky aquifers and rounded-off with natural fermented concoctions from the earth and the still.

The walls and enclosures of the temples were outside the door at the end of a sweet, paved walk on paths edged with fauna, exotic trees, birdsong, fields and a town on the horizon. The site is located on a plateau and the scenery falls away from it into a sweep of pasture. This placement also lends a hallowed aura to the location.

We walked through this tiny Eden to the awesome stone monuments.  Enjoy Greg’s photos as we journal through this experience because there are more questions to be asked than facts to be told. Perhaps our photos will give you a sense of the antediluvian spirituality and idiosyncratic beauty.

As you approach and stand in the presence of the rigid, gigantic and venerable walls, the arrangement built by the long-gone folk of our species is intimidating. The culture of the ancients was cradled in their genes and those same genes may be locked in our modern bodies as a product of our ancestry.

The rocks were yellow, golden, and pitted with the eons of rain and sunlight that had warmed and eroded their surface. Weeds and wildflowers were growing from many of the crevices in enchanting arrangements. Oxalis, the bright clover-like ground cover (oxalis pes-caprae as opposed to the local north American, oxalis stricta) is the constant, determined inhabitant of sandy, rocky, dry soils. It’s yellow blossoms sprinkled about announced that it had conquered this piece of earth with its lively, green color as contrast to the ochre tones of the stones.

These walls of gigantic proportions, open to the wind, sun and sea, remained relatively structurally sound over a myriad of centuries. Walking within some of the enclosures even with the lack of roof overhead, one is left with a feeling of being in a closed space in the flux of some activity long stopped but still embedded; an archival stage for a scene that was not playing anymore. The arrangements of tables and hearths were set like altars in the space. The spirits who still dwell here are rooted in their land and to their beliefs.

I can only see the brushstrokes not the whole painting. And from the feeling that I have from those brushstrokes, I humbly advance an interpretation of the calculated scheme of the stones. I have read comments from tourists that the site is just a bunch of rocks. Yes, they are only rocks same just like our fine modern structures might one day be only be piles of concrete and metal and collapsing walls and walks. But imbedded into these old rocks are belief systems older than the Bible.  Our modern cultures are like the weedy oxalis that has sprouted from this soil.  During our ramble, I saw myself….running, carrying, digging, sowing, worshipping and building alongside these personages across an expanse of time that is almost too long to comprehend. 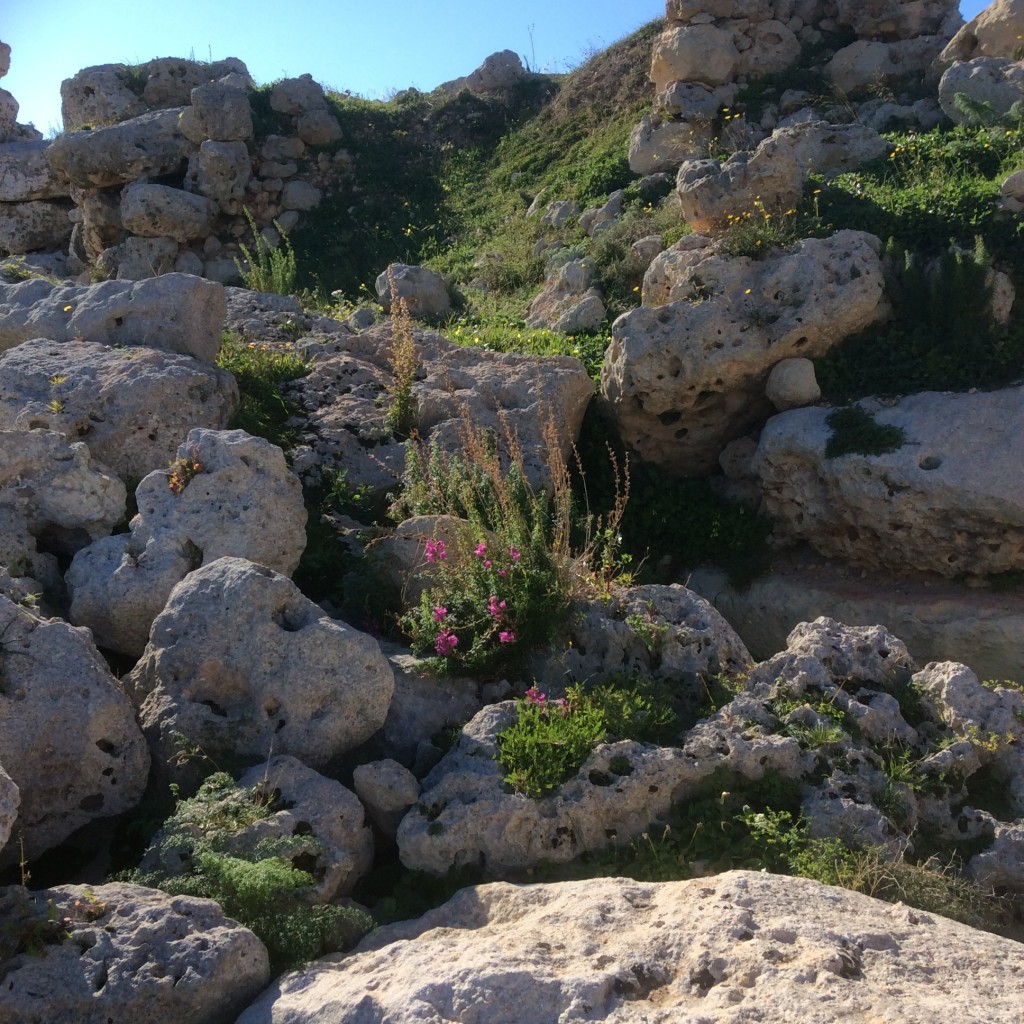 Travel Outside the Box